Avoid These Pitfalls When Writing About Wildland Fire

There is a sentiment in the American fire community that our words are out of sync with our needs. For 50 years we have coaxed a revolution into being ― redefined fire and its consequences, reformed policy and practice, restored fire where it had been unwisely removed. But American society generally does not seem to understand what all that means or what is required to do the task properly. Our words have failed our drip torches and pulaskis. We have prescriptions for fire on the land. We don’t have any for fire in our texts. If the fire revolution is to succeed, it will require a revolution in our language.                                       — Dr. Stephen Pyne, fire historian

My first experience writing about wildland fire was in 2001 when my global science-focused team at The Nature Conservancy (TNC) was developing a proposal to fund a new entity called the Fire Learning Network. Since then, across my different TNC roles, I’ve authored and co-authored hundreds of articles, web pages, brochures, blogs, reports and press releases related to fire. I’ve made lots of mistakes and I’ve learned to avoid some mistakes with coaching from colleagues both inside and outside TNC.

No matter what your role or background is, writing about wildland fire for a general audience is tricky. Below I share some things I wish I’d known when I started out.

First, Do No Harm

To paraphrase fire historian Stephen Pyne: Words matter. As we evolve our approach to wildland fire, we must also update our language to support the transition to a smarter way of doing things.

Use inclusive language and images

When writing about the people involved in—and affected by—fire, check your language for bias. When writing about community wildfire resilience work, it’s best to use inclusive language such as “residents” instead of “homeowners.” This inclusion should carry over in how you select your photos as well – ask yourself, “Who or what is represented? Can that representation be improved?”

Avoid inadvertently supporting stereotypes about who works in fire (“that female firefighter is just one of the boys”).

Don’t fan the flames of fear

Research conducted on behalf of the Partners in Fire Education project in 2007-08 concluded that changing attitudes toward wildland fire management approaches “will require careful word and message choices that respect two key values that cannot be changed by any amount of persuasion [emphasis added]: 1) people are more interested in protecting their families and property than they are protecting the health of ecosystems; and 2) people fear fire, and while they recognize it has some beneficial aspects, above all they want potentially damaging fire to be under control.”

Therefore, avoid sensational or scary depictions of fire in text and photos. Not only is it inflammatory (pun intended) to write about homes “exploding into flames,” it’s also scientifically incorrect (thank you, Dr. Jack Cohen). Strike words like “inferno” from your fire vocabulary.

When writing about a fire that was mainly destructive (every fire has both negative and positive effects), be mindful of the possibility that you could reinforce readers’ negative emotions. Consider balancing negative statements with contextual statements that explain the need for fire. For example, “today’s issues, in part, stem from the fact that fire has been excluded for more than a century…”. You can also qualify negative statements with phrases such as “while some amount of fire is natural and necessary…”

Take care not to inadvertently support commonly held notions that might be false. One such myth is that the public opposes prescribed burning. According to a 2006 research synthesis, “prescribed burning is a largely acceptable practice with roughly 80 to 90 percent of respondents across studies finding it an appropriate management tool.” Another questionable assumption is that communities (or a specific community or community segment, such as new residents) don’t understand their wildfire risk or “take responsibility” for managing that risk (see McCaffrey and Olsen 2012).

I regularly encounter unsubstantiated statements about how managers can’t use prescribed fire near houses or busy roads. This sounds reasonable, but it’s not necessarily true. In Albany, New York, Pine Bush Preserve managers have a robust and long-standing burn program despite dealing with highly volatile fuels and their location–nestled in with three major interstate highways, billions of dollars of residential and commercial real estate, several high-rise nursing homes and a major university. 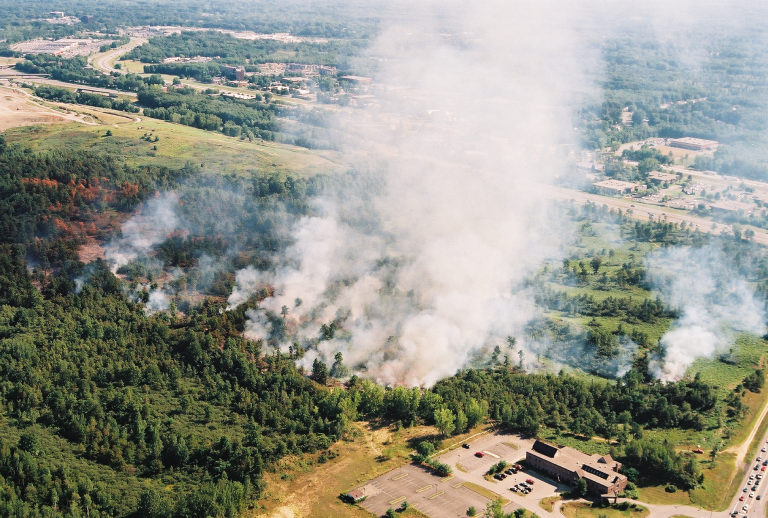 Which of these statements is true?

You probably guessed it: none of these statements are true everywhere. First of all, forests aren’t the only ecosystems that burn. A lot of writers seem to forget about grassland habitats and areas dominated by shrubs such as chaparral. Secondly, many of the western, wildfire-prone forests that we care about happen to be lower-elevation areas dominated by ponderosa pine or other dry forest types. The statements above are more or less accurate for these ecosystems but are not universally correct. To be on the safe side, you might want to insert a phrase such as “in many areas” or “in dry forests like ours” into those types of statements. 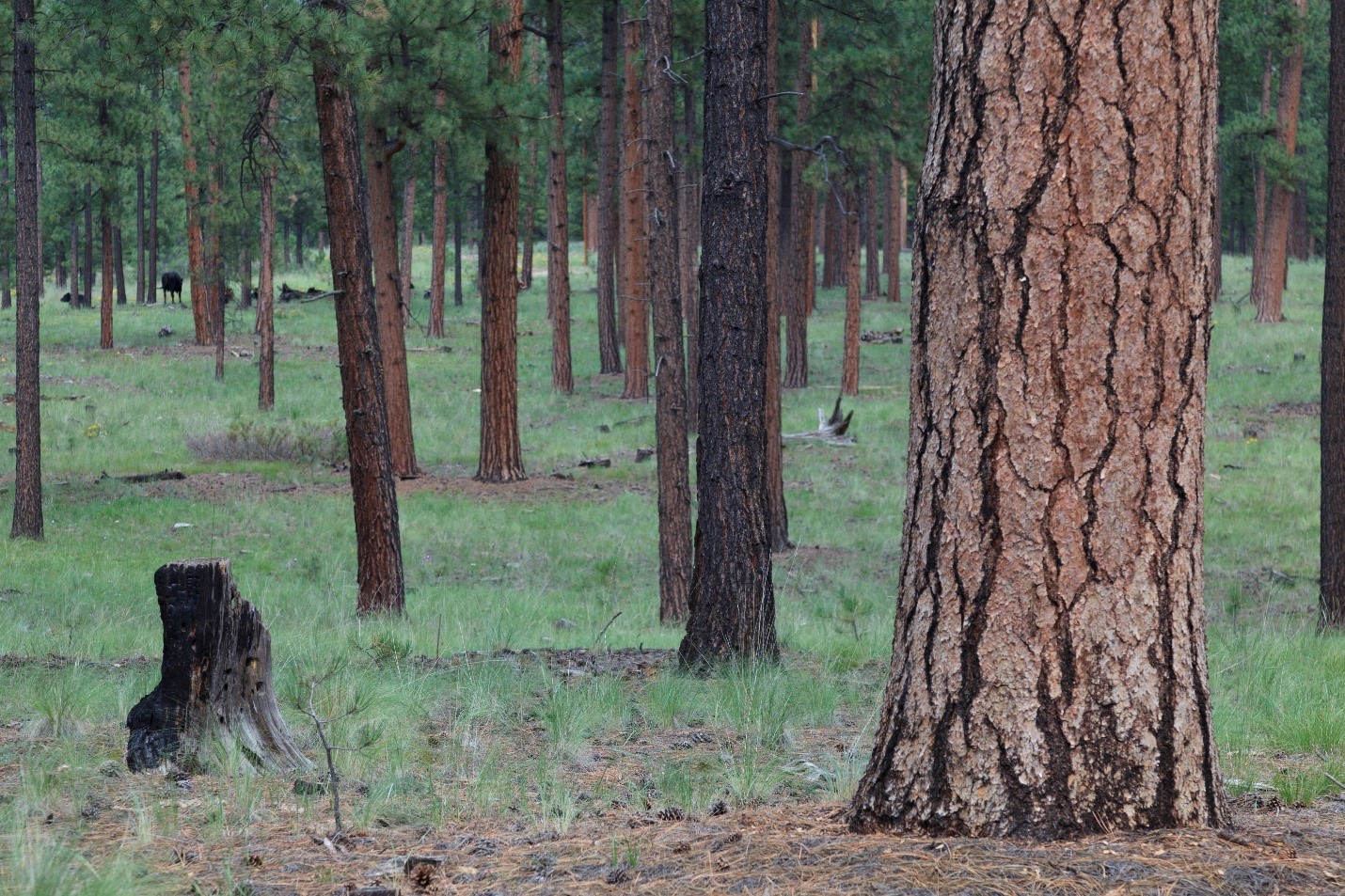 Thinned ponderosa pine stand. Much of what is written about the need for forest restoration in the western U.S. applies to woodlands like this. Photo by Alan Eckert

Food for thought: What are we striving for when we make decisions about lighting and managing fires in natural areas? Are we trying to return a place to its pre-European settlement condition? Are we trying to improve watershed functioning? Are we focused on helping rare species recover, or promoting the growth of culturally important plants? These are difficult questions and there are always going to be tradeoffs.

Smokey Bear: Writers who are new to wildland fire might not know there are laws dictating what you can and cannot use Smokey’s image and likeness for, as well as specific Smokey Bear Program guidelines. Many of our state and federal partners rely on Smokey to teach kids about the importance of fire safety and don’t appreciate seeing Smokey disparaged in print. You’ll also want to get the bear’s name right. If you refer to him as “Smokey the Bear,” expect to be admonished as follows: “Smokey doesn’t have a middle name.”

Nomex: Nomex, the material used to make the green and yellow clothes worn by firefighters, is a registered trademark and should be capitalized.

Firewise: The National Fire Protection Administration’s Firewise U.S.A. program is also trademarked. A neighborhood or other area with a formal Firewise designation should be referred to as a “Firewise U.S.A. site.” 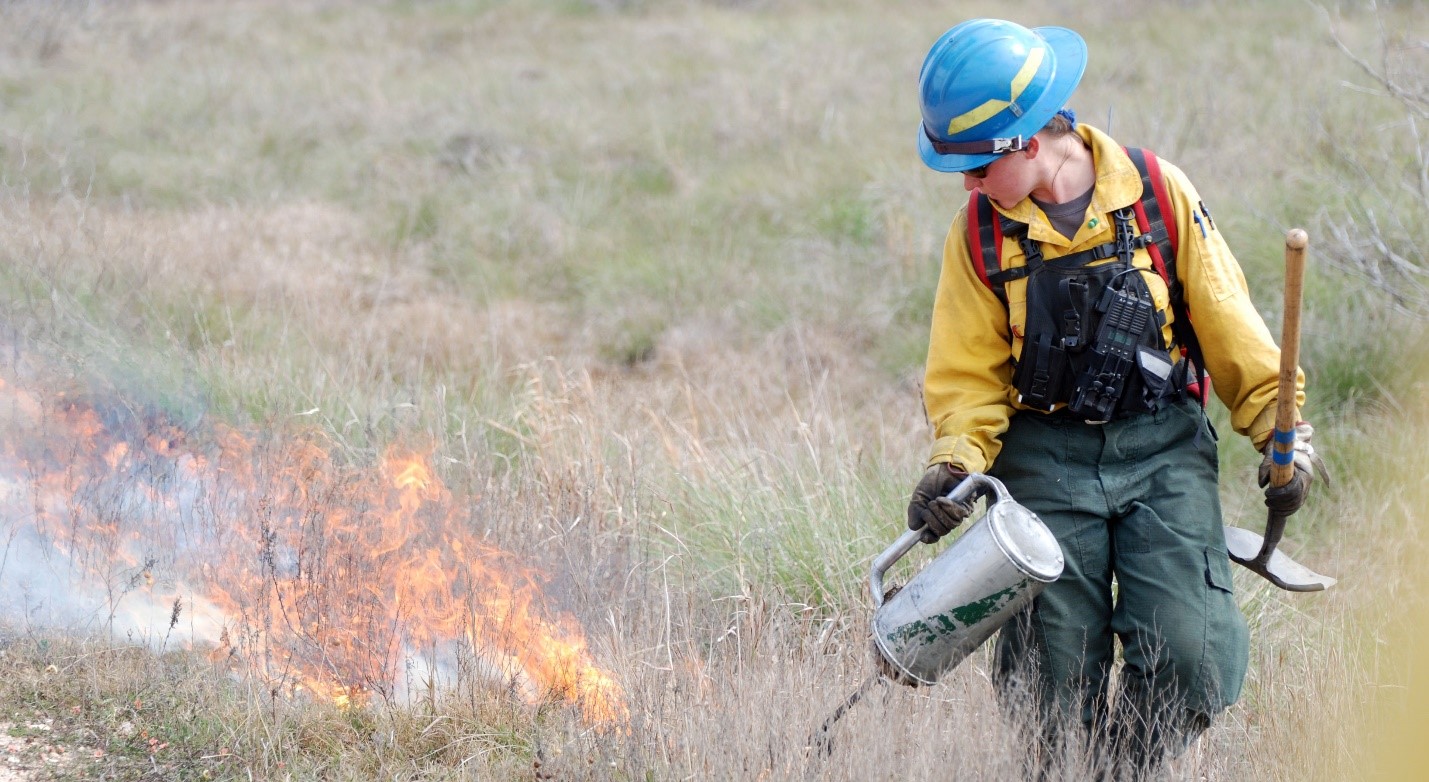 This fire worker is wearing the appropriate PPE. Photo by Wendy Fulks

Personal Protective Equipment (PPE): If you work for an organization like The Nature Conservancy that follows National Wildfire Coordinating Group guidelines for its fire work, and you publish photos of that work, make sure a fire expert reviews them for the proper personal protective equipment (PPE). This is a matter of reputation. If you publish a photo of a bare-handed burner standing next to flames, your organization could look bad. Safety is paramount in the fire community, and donning the proper PPE reflects on both a person’s and an organization’s commitment to safety.

As Dr. Pyne pointed out, wildland fire scientists and managers at all levels have coaxed a revolution into being and American society is catching up to what that means and what will be required of all of us. We can all do more to facilitate the social change that’s necessary, and I hope this post will help in some small way.

Thanks to all the fire ecologists, prescribed fire practitioners and other colleagues who have taught me about fire and fire communication over the years.