Changing the Fire Paradigm in New Jersey: The Power of Networks and Sustained Investments

Relatively few people outside of New Jersey have heard about the 1.1-million-acre area known as the Pine Barrens, or Pinelands, a biological gem in the southern part of the state. Just an hour or two by car from Philadelphia and New York City, these beautiful forests, sprinkled with retirement communities, are also highly flammable.

2014: An Advocate Meets the Network

For 30 years, Bill Brash had worked at the Mercer County field office for the NJ Department of Agriculture, eventually becoming its director. In 2014, one of his projects was in Barnegat Township, in the northeastern portion of the Pinelands, where he was spearheading the development of New Jersey’s first Community Wildfire Protection Plan (CWPP). Bill was also making strides with Firewise USA® sites in the area.

A Passion for Blues, People and Forests

Bill lives in Freehold, New Jersey with Elena, his wife of 37 years, and their two schnauzers. Bill and Elena have two daughters–both married and each expecting their first children this spring.

Bill, who loves blues music, also has a passion for helping people and forests. In addition to working for the NJ Department of Agriculture, Bill has worked as a consulting private lands forester for 35 years. Today his consulting work is primarily in urban forestry. Bill especially loves his role as the forester for Freehold Borough, hometown of “The Boss” Bruce Springsteen.

In 2018, Bill encountered this London planetree, made famous by the “The Boss” Bruce Springsteen in a photograph included in the lyric sheet of his 1984 album, Born in the U.S.A., while completing a tree inventory in Freehold Borough. Left Photo courtesy of Bill Brash. Original 1984 photo from Brucebase Wiki.

In June 2014, Bill attended his first FAC Net workshop. It was there that Bill and his colleague and friend John Cowie from the Barnegat Fire Department learned about Fire Safe Councils in California and Nevada. They immediately saw the value of bringing such a council to New Jersey. And they acted.

In February 2015, with funding from FAC Net, Bill created the New Jersey Fire Safety Council, a 501(c)(3) organization. Its mission is to “achieve municipal resiliency through wildfire preparedness and prevention efforts. These efforts are designed to protect residents, reduce property damage and conserve our natural resources.”

With the ink still drying on the Fire Safety Council’s 501(c)(3) paperwork, Bill boarded a plane to Jacksonville, Florida in April 2016 to attend his third national FAC Net member workshop. During the field tour at that workshop, he learned about Florida’s prescribed fire-friendly policies, including liability protection for burners, and a provision that acknowledges the importance of burning to accomplish ecological outcomes.

Bill returned home with a copy of the article “Florida’s Revised Prescribed Fire Law: Protection for Responsible Burners” given to him by workshop hosts.

Fast forward to August 2018. After several years of work involving Bill, the New Jersey Forest Fire Service (NJFFS), New Jersey Audubon and others, the governor signed the Prescribed Burn Act. This legislation, which includes some language borrowed directly from the Florida Prescribed Burning Act, preserves landowners’ rights to conduct prescribed burns, strengthens protections for fire practitioners, and expands acceptable uses of prescribed fire. Prior to passage of the legislation, the NJFFS was only allowed to conduct burns to reduce hazardous fuels. Now the state explicitly recognizes the benefits of prescribed fire for ecosystem management.

According to Bill, “the new prescribed burn legislation gives the NJ Forest Fire Service a larger burn window and greater opportunities to promote the concept of prescribed fire for both fuel reduction and ecological habitat enhancement and gives them a bigger and better toolbox with which to practice their profession.”

Thanks in part to the new law, the NJFFS increased burning levels by 50 percent—to more than 30,000 acres—in 2019. A prescribed burn conducted in March 2019 was credited with stopping the 11,000-acre Spring Hill fire, which started later that month. 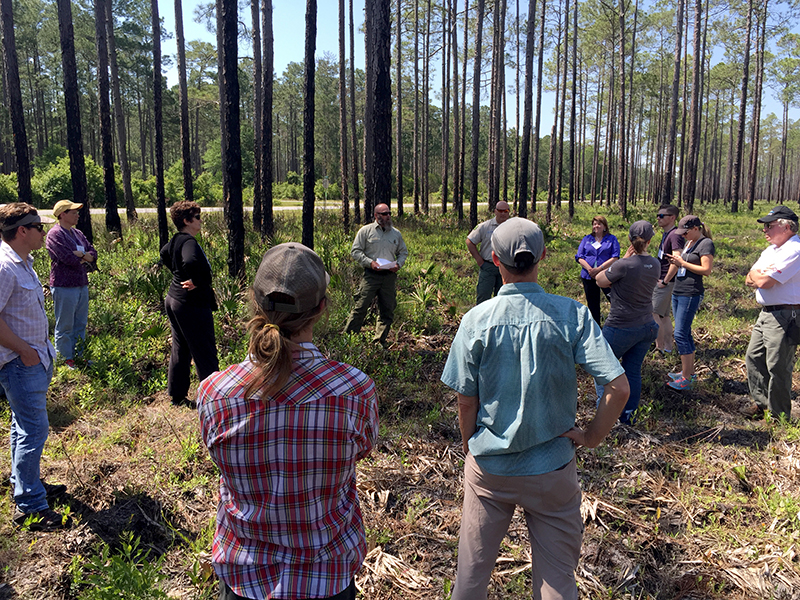 While Bill has recently cut back on his forestry work to spend more time with family, he doesn’t have any plans to slow the pace of his community wildfire resilience work. Bill still works with residents and supports Firewise USA® sites in the Pinelands. He’s also revising and updating CWPPs statewide and, through the New Jersey Fire Safety Council, continuing to strengthen that statewide voice to advocate for wildfire preparedness and prevention. With support from FAC Net, Bill is working with the state and the Natural Resources Conservation Service to train private forestland managers in prescribed burning. He also recently completed a large, technically complex fire preparedness drill with first responders in Ocean County.

With continued support from FAC Net, Bill is optimistic about being able to build on past achievements to increase the resiliency of New Jersey’s communities and forest ecosystems.

Our relationship with FAC Net has been very beneficial to New Jersey. We have grown our prevention programs and our preparedness programs in ways we might not have imagined 5 years ago. [While] FAC Net provides a little funding and helps with problem-solving, one of their greatest contributions is the creative energy that results from the annual workshops.