Science Thursdays: A Look Back at Thirteen of Your Favorite Stories

Editor’s Note: The FAC Net Blog is coming up on its 6-year anniversary in January 2020! Since 2014, we have hosted more than 440 posts on all things FAC: from community resilience, prescribed fire and codes and ordinances to policy, wildfire response and more. After doing a bit of sleuthing, we found that many of our most popular posts were from the Science Thursday (or, Tuesday, when we used to post twice per week) series, featuring Lenya Quinn-Davidson.

With 2019 coming to a close, we want to make space to reflect back on some of your favorite Science Thursday posts over the last few years. Enjoy!

“I’m sure many of you are familiar with the kids’ book “Going on a Bear Hunt.” The family in the book is on an adventure that takes them through rough terrain: a swirling, whirling snowstorm; a deep, dark forest; thick, oozy mud; long, wavy grass; and a narrow, gloomy cave. For readers, the suspense builds toward the cave, where a bear awaits in the darkness. But as someone who’s done a lot of fieldwork, it’s actually the long, wavy grass that makes my skin crawl. What about ticks?!” Keep reading… 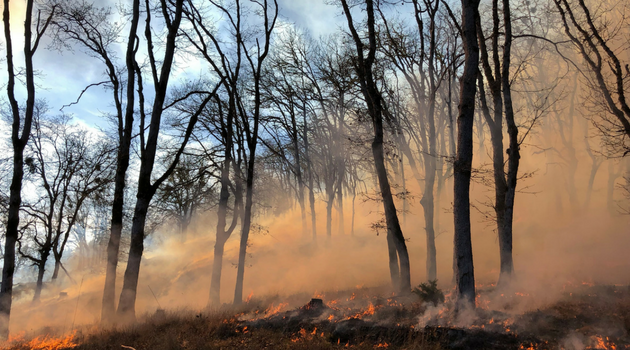 “When was the last time you changed your mind about something important — something that you thought you knew? This question was posed at a conference I attended recently, and it has lingered with me ever since. I’ve been mulling it over, coming up with my own personal examples, and I’ve been asking friends and colleagues to ponder it, too. I love the question because it’s asking us to consider how open-minded we really are. And in this era of political and social divisiveness, where it’s so easy to become siloed, I think it’s more important than ever to open ourselves to new ways of thinking and doing — even around topics that we know well.” Keep reading…

“I came out of last week looking like someone who’d just been released from a hard labor camp. My hands were covered in blisters from digging soil pits for a research project, and my arms were covered in bruises from hauling t-posts and hog panels to those same research sites. (So many bruises, in fact, that I’ve been too embarrassed to wear short sleeves for the last five days.) To add insult to injury, I had “White bites” from my fire boots on the fronts of both ankles, and I was dehydrated and sore from two full days of burning and hiking across hundreds of acres in Humboldt County’s steep coastal rangelands. In short, I felt amazing. There’s no better feeling than being truly tired and sated — body and soul — after a week of inspiring work.” Keep reading…

“I was nine years old when my dad’s family home burned in the Oakland Hills Fire. As a country kid from one of the most fire-prone counties in northern California, I was no stranger to wildfire. Still, I remember the shock of driving through his childhood neighborhood in the weeks after the fire, seeing nothing but the skeletal remains of vehicles and homes — so different than the forest fires that I was used to back in Trinity County.” Keep reading… 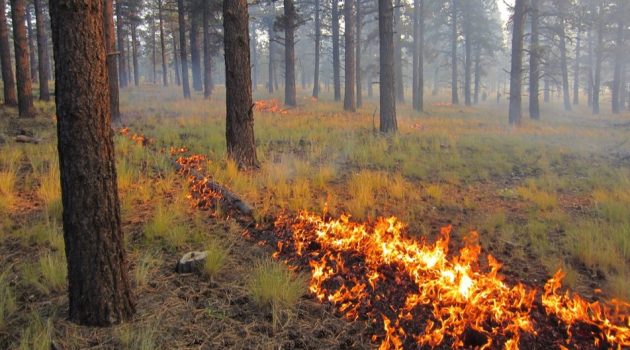 “Earlier this month, I traveled to New Mexico to meet with Eytan Krasilovsky of the Forest Stewards Guild and other leaders from the New Mexico Prescribed Fire Council. I lead the Northern California Prescribed Fire Council, so I was excited to spend time hearing about issues in New Mexico and sharing stories from here. We share some interesting parallels that I hadn’t realized previously: our councils formed in the same year (2009), and both regions had tragic escaped prescribed burns—within a year of each other! (The Lowden Fire, which happened in my home county in July 1999, burned 2,000 acres and 23 homes. Only 10 months later, the Cerro Grande Fire escaped from Bandolier National Monument and burned 48,000 acres and more than 250 homes.) Even now, almost 20 years later, the prescribed fire communities in New Mexico and northern California are still haunted by those events.” Keep reading…

“How did you find fire? Did it come to you — a wildfire in your community, a random job opportunity — or did you go to it? I like to think I was born into it. I was born at home in rural northern California during a wild winter storm, and my doctor became stuck in the snow on his way to our house. My mom and dad ended up delivering me on their own, and when they decided on a name, they called me “Lenya”—an altered spelling of the word “leña,” which means firewood in Spanish. It may have been in that moment that my fate fell into place. But even with firewood as my namesake, it took me many years to truly find fire.” Keep reading…

“I recently found myself venting about the idea of “nature.” The concept has always bothered me. There’s an inherent separatism in it—an implicit line in the sand between humans and nature, where we can and should appreciate it, but we think we aren’t really part of it.

I struggle with these ideas often in my work. I’ve had people question the naturalness of frequently burned landscapes if they know that humans had a role in ignitions—even if human ignitions extend thousands of years into the past. The dichotomy runs deep.” Keep reading…

#8 – Science Thursday: An Argument for Heterogeneity, in the Kitchen Sink and in the Fields (2018)

“I have a confession to make: I am obsessed with stinky sponges. You know the type — the sponge that, despite looking new and clean, leaves your hands reeking for hours. You can scrub your hands with copious amounts of soap, you can apply strong-smelling lotion, and yet you still find yourself gagging hours later when your hand passes by your nose.

My obsession began eight years ago, when I worked in an office with a stinky sponge. The sponge was replaced regularly, yet it always smelled bad. Then I started working in my current office, only about a mile from my previous office, and again — a stinky sponge. I thought it might be location, something in the water, but then I noticed it in other places. Even my most fastidious, neat-freak friends had stinky sponges.” Keep reading… 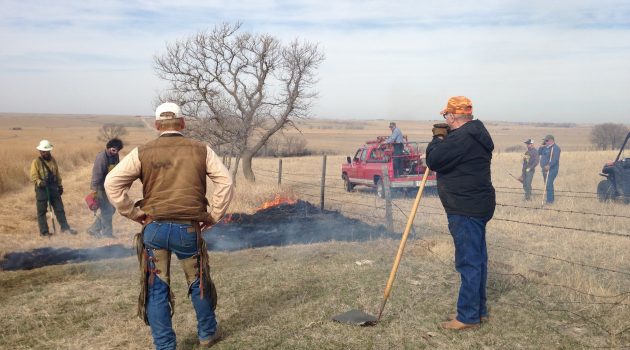 “Last week was filled with firsts: my first time in Nebraska; my first time trying Mountain Dew, Rocky Mountain oysters and runzas (a Nebraskan spin on a sandwich); my first time tagging the ear of a newborn calf; and my first time touring cattle feedlots. It was also my first time burning with a prescribed burn association made up of local ranchers and landowners, saying a prayer during an operational briefing, and dragging a drip torch without my yellows and greens—just jeans, a cotton t-shirt, and my boots and gloves. (It was also my first time sleeping in a basement with three loose snakes, but I’ll save that story for another time!)” Keep reading…

“All of my friends know that I’m a bit of a holiday scrooge. Holidays involve all kinds of societal traditions that put me on edge, like setting off explosives, dressing up in costumes, and obligatory gift giving. But Thanksgiving is a different story — not only is there a focus on food and drink (my two favorite things!), but it’s also the perfect time of year to get outside and appreciate the bounty of our places: the crab in the bay, the salmon in the creeks, the mushrooms in the woods.” Keep reading…

“No matter where I am, I always find myself subconsciously looking for two things: fire and oaks. I start looking for clues, trying to uncover the stories and processes that I know are there, and wondering where the Quercus is to round out the picture. (I remember being elated to find oaks in the cloud forests of Chiapas, Mexico, and having the feeling that something was missing when I’ve visited my sister in Alaska.) I know—by default, I seem to have a fairly narrow focus–but alas, I come from a fire-loving state with more than 20 species of oaks. It’s in my nature.” Keep reading…

“To see dwarf mistletoe seeds is to experience them. These are not typical seeds that gently drop from a mature plant. Rather, they are explosive — forcibly ejected from their fruits at high rates of speed. I remember learning about this in college: that dwarf mistletoe seeds can travel up to 60 mph and fly more than 60 feet from their hosts (Hinds et al., 1963). This process is triggered by internal heat production (called thermogenesis) within the mistletoe fruit — something that’s never been observed in another plant (Rolena et al., 2015). It wasn’t until many years after college that I actually experienced the phenomenon for myself. I remember driving along the Trinity River here in northern California and seeing a sudden splattering of little gelatinous green balls all over my windshield. I still remember how excited I was when I realized what they were: seeds that had flown as fast as I was driving.” Keep reading…

Medusahead is a late-season grass; it goes to seed after most of its neighbors have turned brown, making it vulnerable to late spring burning. Credit: Lenya Quinn-Davidson

“The first thing I did at work last Thursday was smash my ring finger in the door of a truck. I got out to open a gate, and my finger decided to stay with the door as I slammed it shut with my other hand. I didn’t know it was possible for a door to latch when a full knuckle is in its way, but indeed it is!

Thursday was my third day in the field last week, monitoring invasive grasses as part of a small research project I’m working on with some colleagues at University of California Cooperative Extension. The first two days we were baking in 102 degree weather in California’s Central Valley, but by Thursday, we were back in the cool fog of Humboldt County, searching out plot locations and joking about which of us should pound the t-posts for our transects: me, with my freshly crushed ring finger, or my coworker Jeff, who has a dislocated thumb. Such an impressive field crew!” Keep reading…

Eager to read more Science Thursday posts that didn’t make the Top 13 list? Don’t fret, we’ve gathered them below for your convenience! Want to hear more stories from Lenya in 2020? Let us know in the comments what Science Thursday topics you’re interested in!

May 2016: Don’t Believe Everything You Think!

March 2016: Mastication: Not A Simple Story

Feb 2016: Highlights From A Decade of Fire and Climate Research