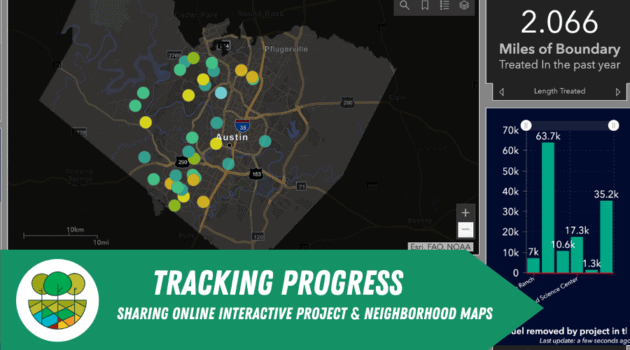 Online interactive maps are an extremely helpful tool in community outreach. Whether it’s keeping residents and visitors informed of prescribed fires and other mitigation projects, or connecting and showcasing neighborhoods who’ve organized grassroots efforts within their communities, maps can greatly improve residents’ understanding of the place-based work of fire adaptation. Online maps can also help communicate projects and results to community members, elected officials, and other partners, and increase transparency around the work being done, especially during COVID-19. Below, we feature three FAC Net members’ mapping projects and their takeaways and recommendations for using interactive online maps.

Tahoe Living with Fire has two important online maps they use on their website for community outreach. The Tahoe Network Map, launched in 2019, allows neighborhood leaders and interested Tahoe residents to select points and polygons on the map to see where neighborhoods are working to prepare for wildfire; find out where fire district target hazard areas are each year; and learn who owns particular parcels of land in their neighborhoods. 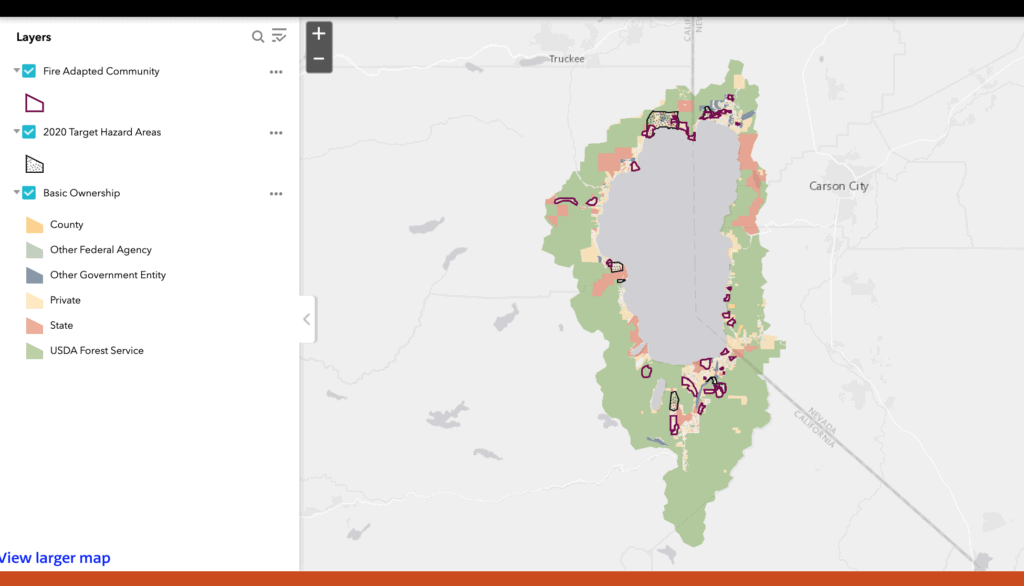 Carlie Murphy, FAC Coordinator, said they “decided to make the Tahoe Network Map interactive so both existing and interested neighborhood leaders can learn where there are other neighborhood leaders, and can feel empowered to contact public land management agencies about the land they own in their neighborhoods.”

The Prescribed Fire and Project Map, launched almost five years ago by the Tahoe Fire and Fuels Team, has been used extensively. This tool helps residents and visitors learn where prescribed fires and projects are currently underway throughout Tahoe. Users can click on the prescribed fire or project points on the map to see which agency is responsible for it, who to contact with questions, expected smoke impacts, and other information that might be helpful to know.

Murphy feels the interactivity of this map is especially important for gaining support for prescribed fires and projects, and for being as transparent as possible about what’s happening in Tahoe’s forests.

The Tahoe Resource Conservation District, which helped launch the maps, was already using ArcGIS Online for data management; for them, creating the maps wasn’t a challenge. Murphy notes that, while all of their team has GIS experience, they relied heavily on their GIS specialist to get everything set up. Now that the maps are live, they are relatively simple to revise. The Prescribed Fire and Project Map gets updated when partners add information (including latitude/longitude) into a Google Sheet, that auto-populates to a web app created in ArcGIS Online, then updates automatically to the live map on the website.

The Tahoe Network Map is updated through a combination of data input through the web app and a Survey123 form (also created in ArcGIS Online), which then auto-populates onto the website. Murphy shares that using ArcGIS Online to create these interactive maps has allowed for seamless collaboration and information sharing between partners and has provided tools to display information to the public in a clear and concise way.

The Benefits, Challenges and Recommendations for Practitioners

Murphy noted the intended primary audience for both maps are residents of Tahoe; the secondary audience includes visitors and partners. While they might have different reasons for looking at the maps, both have provided positive feedback and feel more included in the work being done by the Tahoe Fire and Fuels Team. The maps are the most visited pages on their website; she notes that both interactive maps are beneficial because they allow people to view real-time information.

But, these maps aren’t a “one-and-done” project, notes Murphy.

“One of the challenges of using this type of tool is that it constantly needs to be updated to reflect real-time information,” says Murphy.

To address this challenge, a workflow was established and individuals were identified to take the lead on keeping it current.

“Due to the nature of the maps,” she says, “we make changes and updates frequently to better serve our audiences.” The key to their success, she continues, “is having a mechanism to keep them updated over the long-term so they don’t become stagnant or irrelevant.”

Overall, Murphy feels the advantages of using interactive maps like these are worth the time it takes to get them established and keep them maintained, tools like ArcGIS Online has allowed them to take data sharing to an entirely new level and “that is awesome!”

The dashboards were created to highlight the critical work being done across Austin to reduce the wildfire threat. These dashboards are also used to display and report the Division’s performance measures to the City Council and the community at large. Users can explore the map or search by address to see the work being done in specific neighborhoods. A primary goal of this project was to demonstrate efforts to reduce wildfire risk occur everywhere in the city, not just in concentrated areas. 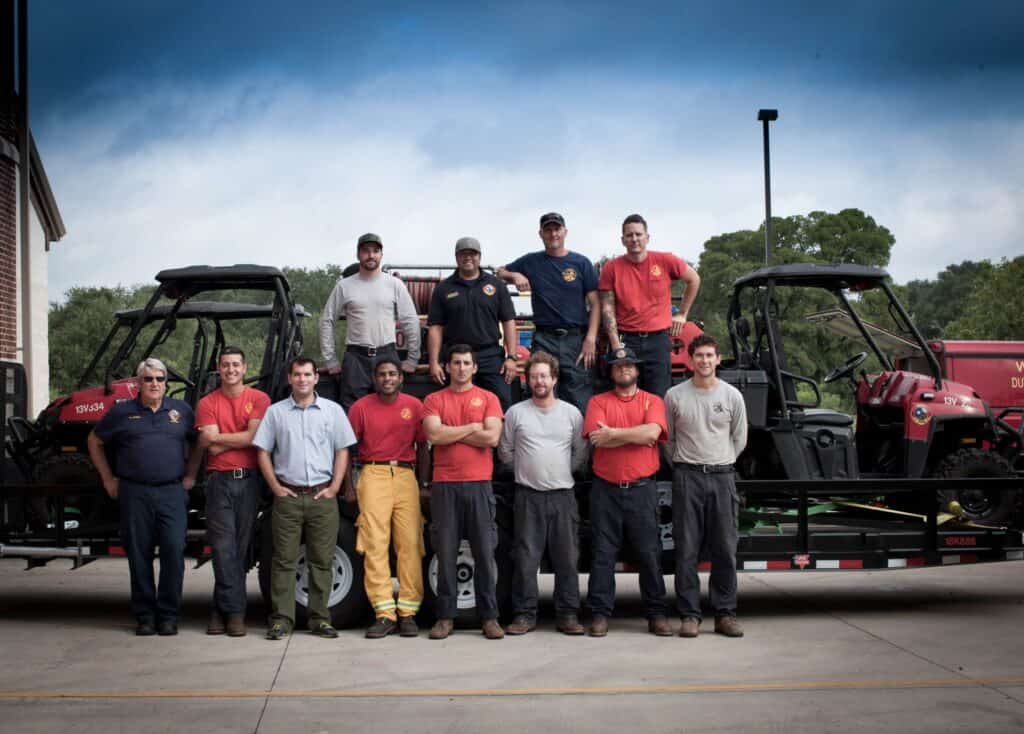 “Our wildfire risk reduction efforts most often occur spatially, so the decision to use an interactive map to track and display these efforts was easy,” says Nate Casebeer, AFD’s Wildfire Division’s GIS Analyst. “By using an interactive map, we can automate and display the latest information straight from the field, giving map users the ability to view project information that is most relevant to their neighborhoods.”

Casebeer, a GIS Analyst, says the dashboard itself can be created in a single day, but the data which feeds it takes time to accumulate. The Division’s fuels’ crew and team members utilize 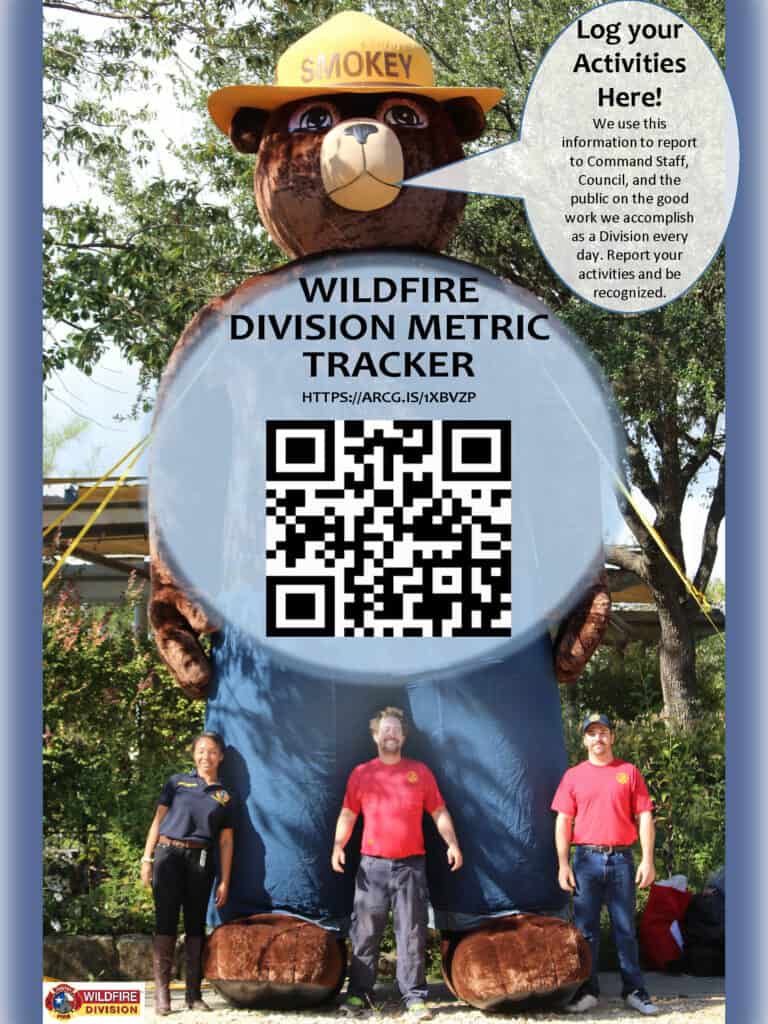 Survey123 on their mobile devices, which then populates the dashboards. AFD’s Wildfire GIS team is continually updating and tweaking the way they visualize information, and are always looking for opportunities to increase the value of these tools.

The Benefits, Challenges, and Recommendations for Practitioners

The feedback about the tools has been overwhelmingly positive. By using an interactive map that is automatically updated, users can have real-time access to the latest statistics on progress and know exactly where the crews are working on any given week, saving staff time in generating progress reports.

“Sometimes, the dashboard is not enough and traditional paper reports are requested from our users,” says Casebeer.

Occasionally, staff receives suggestions on how to improve the tools and tries to incorporate those where appropriate. One function they’d love to have is the ability to populate an automated report that could then be downloaded.

Casebeer feels that maps like this are a great way to aggregate and display complex datasets because it reduces the amount of time spent generating tables, spreadsheets and reports, and increases transparency. He recommends accompanying a dashboard with a Story Map; it can further elaborate on the information displayed within the dashboard, and provide more of a narrative context to the data.

Wildfire Adapted Partnership launched their new Interactive Neighborhood Map at the end of August 2020. For years, they have been working on developing relationships with neighborhoods and subdivisions, especially those within “high-risk” sections of their local wildland-urban interface.

Since their approach to wildfire adaptation is largely based on their Neighborhood Ambassador program, they wanted to visually represent the wide geography comprised by their Ambassadors. The neighborhoods on the map also have a track record of successful wildfire mitigation projects, either at the individual landowner or community scale. The map is an effort to showcase those local communities that have made a commitment to living with wildfire.

Wildfire Adapted Partnership also works with more than 95 high-risk wildfire communities in the five southwest counties of Colorado. Alex Graf, Montezuma County Coordinator, feels their map conveys the work in a more powerful and engaging way, and hopes this “small storytelling tool can inspire others to join in!”

Graf developed the map with input and feedback from coworkers and volunteers. He shared that his basic GIS skills were sufficient in putting this simple map together and felt that, between ArcMap and ArcOnline, the process was easy. 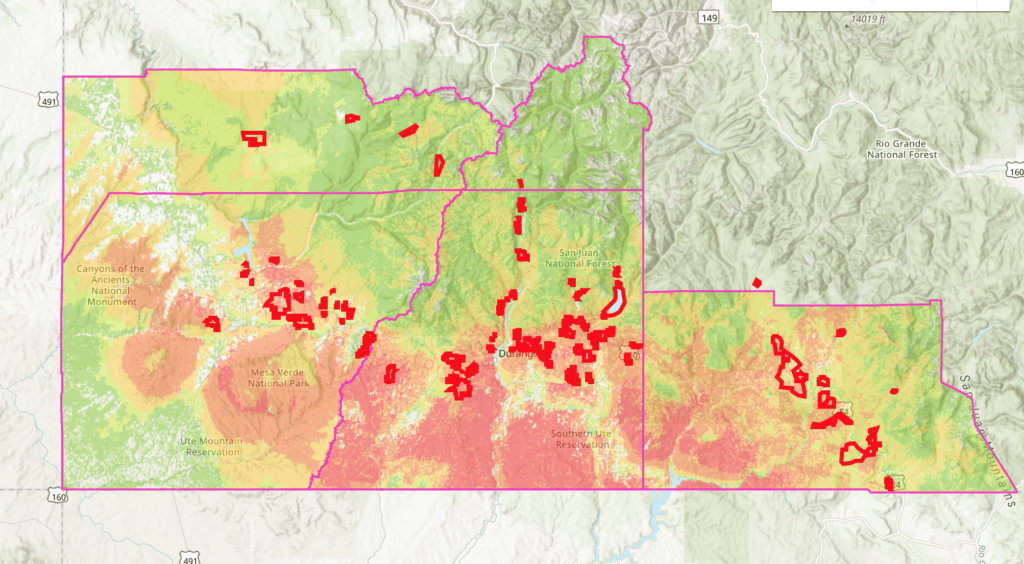 Graf noted that Wildfire Adapted Partnership requested feedback from all the neighborhoods displayed on the map prior to launch. Most feedback was related to the depiction of neighborhood boundaries; otherwise, feedback has been positive. They are eagerly awaiting more response, as the map is only a few weeks old.

The Benefits, Challenges and Recommendations for Practitioners

Even though the map is newly launched, they have already seen increased engagement on their website, particularly from Ambassadors, as well as partners. Graf feels a major benefit of this tool is that it is live on the web; once developed, the only effort required is data updates.

Graf does note that one of the main challenges of the map is the user-friendliness of the application, ArcGIS Online. If a user hasn’t had experience with this map application before, it may be hard to navigate the information displayed. One of his goals is to add a “tour” or a “how-to” pop-up window to help those that need it.

We would love to hear from you about how you use interactive online maps in your work! Share examples and insights for other practitioners in the comments below!