What Does Community-led Recovery Look Like? A Case Study from the Carwoola 2017 Bush Fire

Photo Credit: Taking part in a prescribed burn was a key part of the Hotspots Fire Project workshop. Photo by Kate McShea

One sunny day in February 2017, I got to see first-hand what impact a disaster could have on people when my own small community of Carwoola in New South Wales experienced a bushfire. But I also got to see how a well-designed program about fire in the Australian landscape – Hotspots Fire Project (Hotspots) – could help a community with their recovery process. Hotspots participants learnt together about how fire can be used to protect their assets as well as to promote biodiversity. They learnt how they could take real steps to be better prepared for the next bushfire. Perhaps even more powerfully, participating in Hotspots made people feel more connected to each other and to the local landscape.

I was mountain biking with my husband up to the summit of Kosciuszko, Australia’s highest mountain (2,228 metres/7,310 feet above sea level). At the top, we found we had perfect phone reception. As we sat eating sandwiches and posting pictures of our ride on social media, we started to be inundated with calls and messages from friends, wanting to know if we were OK. We learnt, to our horror, that there was a major fire happening near our home in Carwoola, more than 220 km from our current location. Feeling powerless and very far away from home, we immediately rang our children and my parents to make sure they weren’t in any danger. To our relief, they were fine. And our own houses were not under direct threat from the fire.

Other families we knew were not so lucky. No human lives were lost, but within a couple of hot, windy and panicked hours, eleven homes had been burnt to the ground. Community members, even those not directly in the path of the fire, were left deeply shocked, frightened and even angered by their experience. Almost immediately, they started to look for various means to meet their recovery needs.

Recovery from the short-term disaster

As a researcher, I’m personally really interested in the idea of ‘community-led’, or ‘participatory’ recovery from disasters. Community-led recovery is currently agreed to be best practice by academics, policy areas and practitioners in Australia. From my own perspective, it’s only good sense that the people affected by disaster are the best placed to identify what they need to recover. 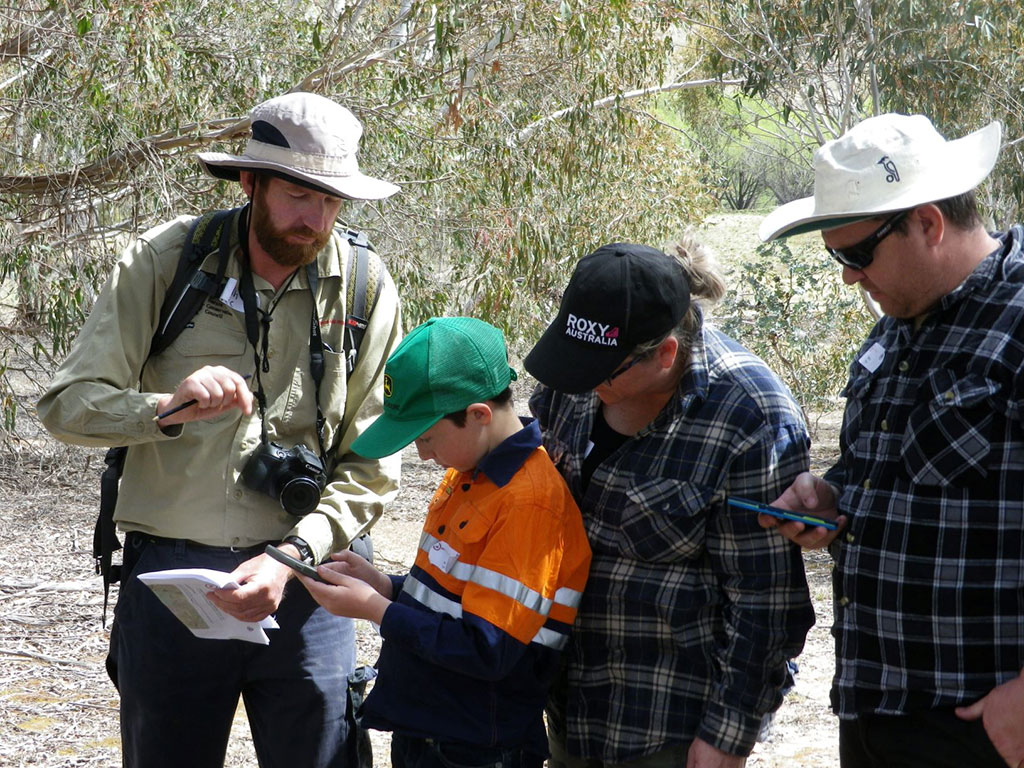 At the same time, I recognise that despite this seeming accord, on-the-ground implementation of post-disaster community-led recovery continues to be a challenge. Not least problematic is that the very word ‘community’ suggests a homogeneity of identities and views that probably did not exist pre-disaster – and which have the potential to become even more fragmented after the experience of a disaster.

So what have been the ties that have bound us in our recovery needs? In the case of many Carwoola residents, their recovery needs haven’t necessarily been in dealing with property, pet and livestock loss. Instead, their immediate needs have been to address the feelings of powerlessness they felt during the fire. Thus, our local fire brigade became overwhelmed by the numbers of people wanting to revisit their previous bushfire mitigation and preparation plans. 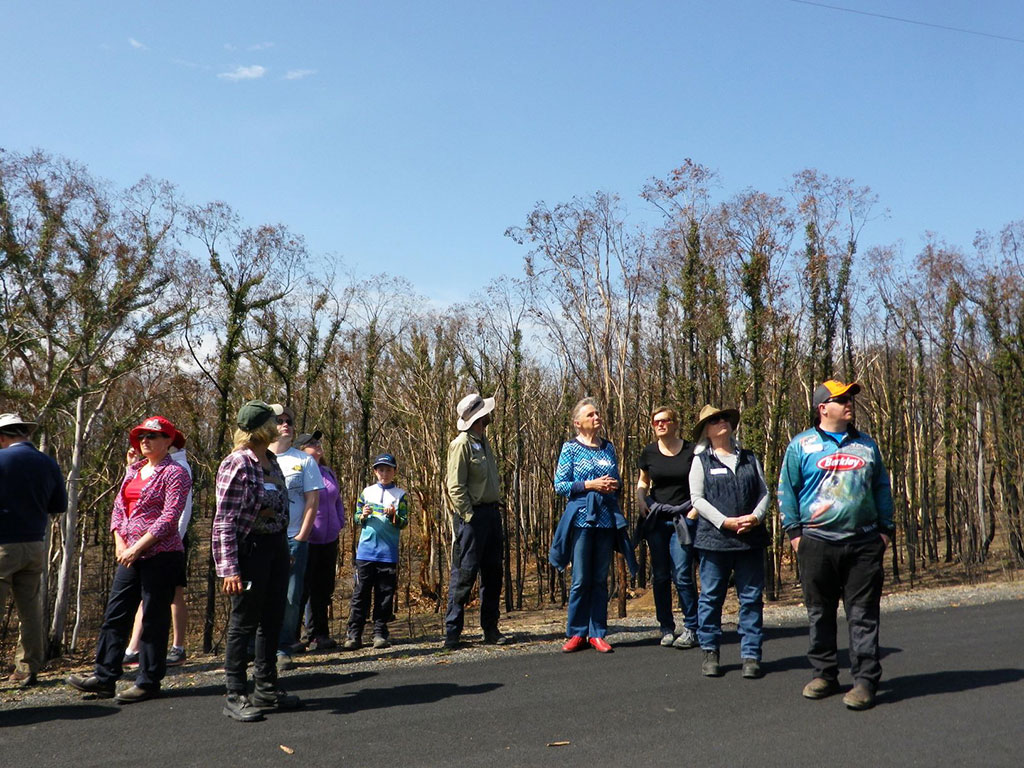 Carwoola residents touring the fireground – seeing both the impact of the bushfire and the process of regeneration. Credit: Kate McShea

The other key value that many residents share is a love of being part of the Carwoola landscape – of having a home outside the city.

These two shared concerns made Hotspots Fire Project, which is run jointly by the New South Wales Rural Fire Service and the Nature Conservation Council of New South Wales, extremely relevant to us. The local fire brigade, thinking that Hotspots workshop would at least be an efficient way to give the same information out to a lot of people, invited the team to come and work with us.

Recovery from the long-term disaster

Carwoola is not so much a town as a collection of around five hundred small rural properties between 2 and 20 hectares in size. It’s located close to the city of Canberra, where many of Carwoola’s residents work and go to school. For around 100 years until about four decades ago, the area was used to farm sheep and cattle. The landscape bears the scars of this farming – with a degraded ecology.

Before European farmers moved into the area in the 19th century, the Carwoola landscape was nearly entirely made up of grassy woodlands. Its hills were a fertile landscape of eucalypts such as snow gums, yellow box, and apple box interspersed with an understory of shrubs, grasses and herbs. These woodlands merged into grasslands around the lower areas where the Molonglo river winds its way. Fire was an integral part of this landscape, and was used by its original inhabitants, the Ngunnawal, Ngambri, Ngarigu and the Walgalu peoples, to manage it for their needs.

Carwoola’s remnant landscape now only exists in tiny pockets. When the European farmers started managing the landscape, they cleared most of trees that were on the hillsides to extend the lower grasslands for their stock. Over time, their sheep and cattle devoured many of the yams, lilies and other flowers that grew in the grasslands, and their hard hooves compressed the delicate soils. Introduced weeds flourished. As the diversity of the local flora suffered, the local animal species declined. Koalas, for instance, which were once plentiful in the area, have been reduced to only a handful of rarely-sighted individual animals. Many more animals, such as quolls and bettongs, have disappeared and have been replaced by foxes and rabbits.

Nevertheless, the community of Carwoola love their land. Many residents are deeply passionate about helping their properties start to recover from the long-term damage of farming activity. Despite their recent experience of bushfire, they were interested in learning more about the role that fire can play in promoting biodiversity. They were very interested in being part of Hotspots.

Hotspots Fire Project has been running for many years in New South Wales, but this was the first time it had been run with a fire-affected community. I was fortunate enough to attend, and then also to run an evaluation of how well it had worked for the community a few months later.

The program was designed to give people a lot of information about fire, their local ecology, and how the two work together. They learnt about local plant species and how some of them are reliant on fire to germinate seeds. They learnt about how the grassy woodlands they think of as ‘natural’ are in fact the result of human management using fire as a tool. They were encouraged to start mapping how they could use fire as a land management tool on their own land.

More importantly, they learnt about their own bushfire. A tour of the fire ground showed people where it started and how it moved across–and was shaped by–features of the landscape. Even though the workshop was held seven months after the fire, Carwoola residents were able to look at the burnt eucalypts and see the strong westerly wind that fanned the bushfire in the ‘foliage freeze’ – the leaves burnt into one position by the bushfire. Near the site of a destroyed house, they could see small signs of post-fire regeneration – green shoots on the branches of older trees, and grasses appearing from the ground.

Feedback from participants was that they found the workshop to be really valuable, and most people had taken their learnings and put them into practice. This practice tended to be in the form of making their house more fire safe rather than by putting fire to the ground. The program didn’t appeal to everyone in the community. For example, people who had homes in the burnt fireground seemed to have no interest in attending. This was interesting, as understandably, when the Hotspots team had designed the program they had assumed that they would be helping everyone in the community.

Hotspots Fire Project staff have now used their learnings from the Carwoola community to run similar programs to facilitate the recovery of other bushfire-affected communities.

Zoe D’Arcy is a Planning and Research Officer with the New South Wales State Emergency Service in Australia. She is also at the beginning her PhD journey. Her research topic is “The ‘fire-adapted community’: Reframing the wicked problem of bushfires in the Australian landscape.”