Editor's note: Kimberley O'Neil and John Mock have been fire adaptation leaders in their community for 15 years. This summer, their community's work was put to the test during the Ferguson Fire. Learn how their work held up. In this photo, John and Kimberley are being presented with a plaque of appreciation from Yosemite National Park's chief of fire and aviation, Kelly Martin. Credit: Yosemite National Park 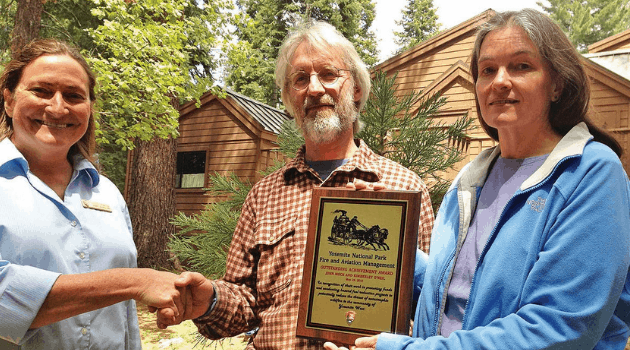 “You have to get involved with fire,” urged a friend who survived the 1991 Tunnel (Oakland Hills) Fire. That sage advice came shortly after we bought our house in Yosemite West in 2002. At that time, we knew little about wildfire and had never heard of the Wildland-Urban Interface (WUI) — let alone considered the risk and responsibility of living in it. But, we did know that we didn’t want our house to burn down.

Yosemite West is an isolated mountain community in Mariposa County, California, perched on a ridge, in a mixed conifer forest. It sits at 6,000 feet in elevation and has slopes as steep as 40 percent. Surrounded by undeveloped, privately owned lands, Yosemite National Park (the Park) and Sierra National Forest, its 109 acres contain 294 parcels with 161 houses, with new construction underway. A couple dozen of us live here year-round, but seasonally the population swells when several hundred tourists rent houses in the summer to be near Yosemite Valley.

A Disaster Waiting to Happen

Yosemite West has always been at extreme risk of wildfire, due to a long list of reasons:

We were a disaster waiting to happen. And that was before the recent five-year drought and tree mortality crisis. As of April 2018, 129 million dead trees were documented in California. Sixty-six million of those trees are in the National Forests in and around the Sierra Mountains, in places like Yosemite West (PDF, 756KB, see Page 2). 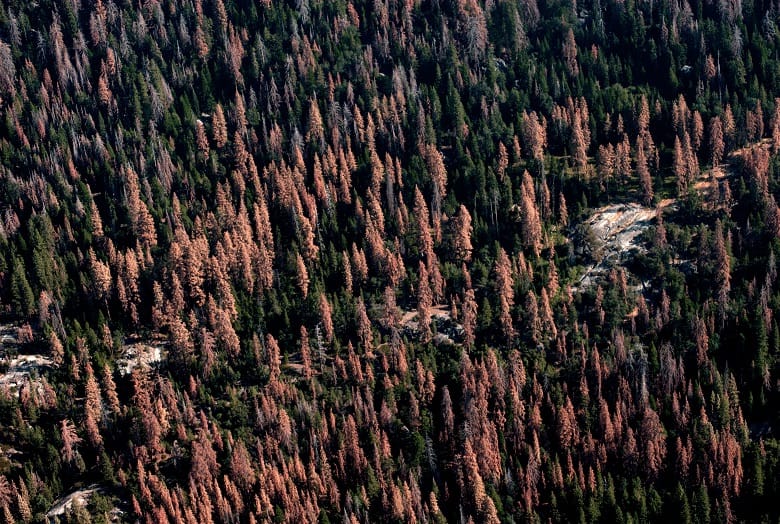 Do Something or You’re Going to Burn!

In 2003, our neighbors Kay Pitts and the late Don Pitts, a retired federal magistrate, started a discussion on how to protect Yosemite West from catastrophic wildfire. The Park answered their plea for help. The Park’s prescribed fire and fuels specialist, Mike Beasley, led our first community meeting and set the tone with a call to action. His message was clear: “Do something or you’re going to burn!”

The Park was already proactively reducing hazardous fuels along a nearby road, and Mike explained how similar fuel reduction on our western and northern perimeters was vital to our protection. When we offered to lead the effort, Judge Pitts wisely cautioned, “Steer the ship straight down the middle, captain.” In other words, let fire science guide your decision making and don’t let conflicting owners’ interests or developers’ business plans take you off track. Got it. Little did we know then that the meeting would take us on a 15-year journey of procuring grant funding and implementing hazardous fuel reduction projects.

A Roadmap to Success

The Park led us through the first step of the process by hiring Wildland Fire Associates to draft the Yosemite West Community Wildfire Protection Plan (CWPP; PDF, 13.6MB). Under the leadership of Dan O’Brien and Carl Douhan, with expert mapping done by Esther Mandeno of Digital Mapping Solutions, the draft plan was prepared and turned over to the community for completion. The final CWPP contained a daunting list of prioritized hazardous fuel reduction projects with detailed budgets. On “handover day,” we recall saying to Dan and Carl, with some disbelief, “You expect us to write grants to fund these projects and then to implement them?” They looked at us, smiled, and replied, “Yes.”

Today our CWPP is a scribbled on, highlighted, dog-eared and well-worn document with multiple protruding Post-it notes. It is certainly not a “fancy” report that collects dust on a bookshelf. It is a useful, essential tool — a roadmap to success. Treat the perimeter first, then treat the interior. Start with the first project and work through the list methodically.

Success comes from building strong partnerships, and for us, that meant getting a lot of people and agencies to support us: the Yosemite/Sequoia Resource Conservation and Development Council (our eventual fiscal sponsor); several Mariposa County agencies and departments, including the Mariposa County Fire Department, the Fire Safe Council, the Office of Emergency Services, the sheriff, and the  board of supervisors; CAL FIRE; the USDA Forest Service; and of course, the National Park Service.

The Park’s chief of fire and aviation management, Kelly Martin, became one of our key partners and is an impressive leader and role model. Chief Martin spoke at neighborhood meetings once or twice a year for more than a decade, which consistently demonstrated her commitment to working with our community. We endeavored to do everything she asked of us and it has been a privilege to have her on our side.

It took several years to find the right mix of contractors, each with their own strengths. Flexibility in scheduling was also essential. For example, our technical sawyer, Brett Evans, brought a polite calmness, creativity and intelligence to his work. He’s also a rock climber and in May 2017, he had his eyes on El Capitan and wanted a week off from tree work. One day of his trip, Brett met the renowned climber Alex Honnold who was planning to free solo a nearby route which eventually became the subject of the critically acclaimed film Free Solo. Alex took the time to help Brett and his partner work through a few moves, which Brett later described as “… like shooting hoops with Michael Jordan.” Happy sawyers are productive sawyers.

We Didn’t Take “No” for an Answer

A successful residential wildfire risk reduction project requires maximum participation from property owners. It doesn’t help if there are “islands” of untreated land, or if owners won’t sign on to all of a project’s specifications. We found that most property owners want to do the right thing, but many have no clue what that the right thing actually is. Regardless, getting them to sign up and give us permission to go onto their property to cut trees and vegetation is tough work.

Along the way, we gained insight into our neighbors’ motivations. First and foremost, people want to pay $0 for fuel reduction. People want visual privacy, which is completely unrealistic on parcels smaller than half an acre. People can’t visualize what fuel reduction will look like, but everyone likes the “park-like” appearance once they see it. We learned that building trust is necessary and takes time. We used persuasion and peer-pressure techniques through the Yosemite West Defensible Space Reality Check (PDF, 36KB) and publicizing the results of our Red Zone Fire Risk Assessment.

We didn’t take “no” for an answer. If a parcel wasn’t signed up for a project, we puzzled out the reason why and didn’t let up until they were on board. Frequently, this process was complicated by absentee owners. Snail mailing or emailing to owners on the county assessor’s list wasn’t enough. For example, we had instances where a spouse had died and ownership shifted to a surviving spouse or a family trust; where a wife would sign up but her husband would not; where an owner was blind and couldn’t read our snail mail; and where a neighbor drove to six hours to get an elderly owner’s signature. We tracked down one owner through a bridal registry in another country. Our takeaway from these hurdles: don’t give up.

A Worst-Case Scenario Burning Right Toward Us

Since getting started, we have successfully implemented nine grants, totaling $840,000. These included: one planning grant to finalize our CWPP, two defensible space grants, three shaded-fuel break grants and three tree mortality grants (taking down 1,976 trees). Addressing our extensive tree mortality was a massive, two-year undertaking. More than 30 percent of our dead trees were between 20 and 58 inches in diameter. Think big trees being dropped between houses on small lots. 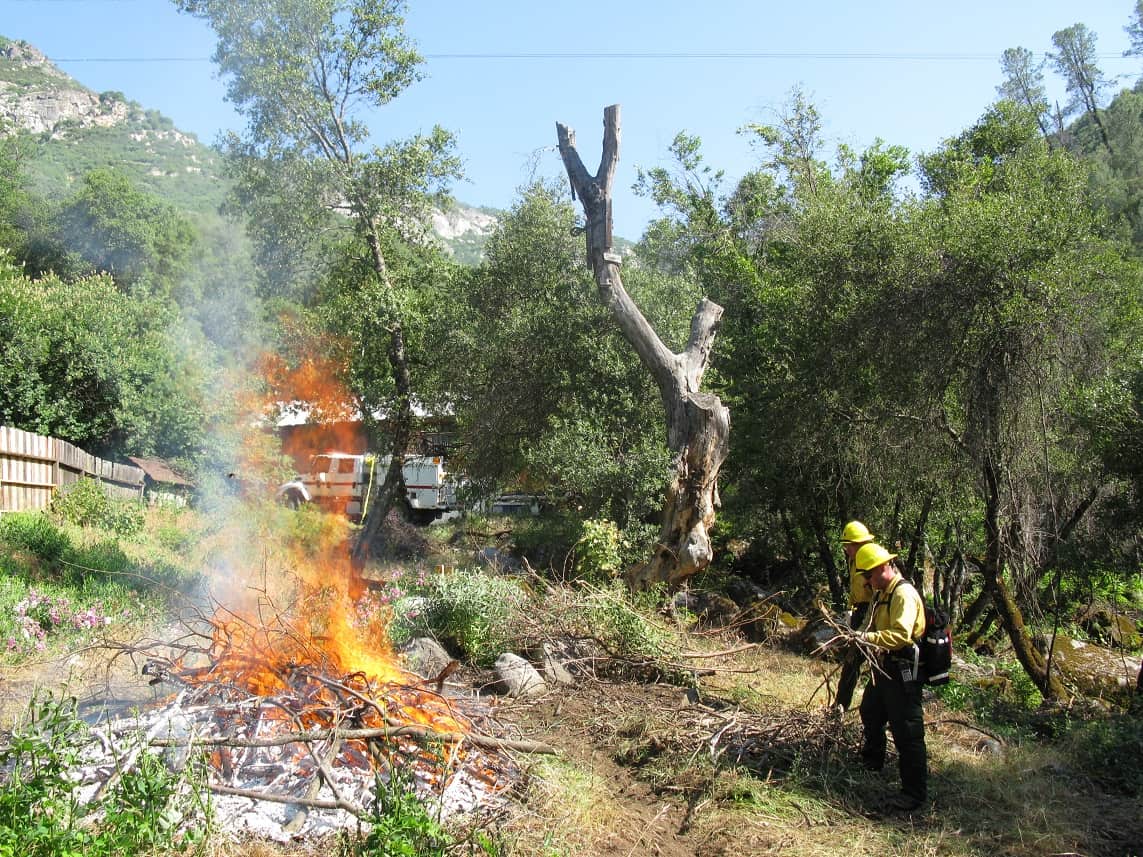 We worked with our community to clear the fuels surrounding our homes, in hopes that our work would allow for safe and effective wildfire response during a potential, future wildfire. Credit: Yosemite National Park

Here we are (green collared shirt and blue shirt) with a crew from Firestorm Wildland Fire Suppression, Inc. Our nontechnical sawyers, Rick Sandidge and Graham Lowe (pictured to the left of us), took down 813 dead trees for us. Some were as wide as 50 inches. Tragically, more than two dozen Firestorm crew members lost their homes in the Camp Fire. If you’d like to make a donation to the Firestorm Camp Fire Relief Fund, click on the photo above to be redirected to the fund’s PayPal link. Credit: Firestorm Wildland Fire Suppression, Inc.

Luckily, we completed our tree mortality projects by the second week of June 2018, just five weeks before the Ferguson Fire started (on July 13). After the 2018 fire year in California, you might not recall the Ferguson Fire, but make no mistake, this was a big fire. It burned just under 100,000 acres, required the closure of most of Yosemite National Park, forced several communities to evacuate and resulted in two fatalities.

Our work created an environment that was safe enough for firefighters to work in. When the strike teams arrived in Yosemite West, all standing dead trees identified by the projects had been felled. Our shaded-fuel breaks were in place.

As we evacuated our home, it felt as though everything we’d done was with this very moment in mind. All we could do at that point was trust that our efforts would work. And, they did. Yosemite West emerged unscathed from the Ferguson Fire, with no structural or infrastructure damage. It turns out that the very first shaded fuel break we implemented on the western and northern perimeters of our community was key. Firefighters lit a critical back burn within it and when the fire finally came at us with a whirl, it held. 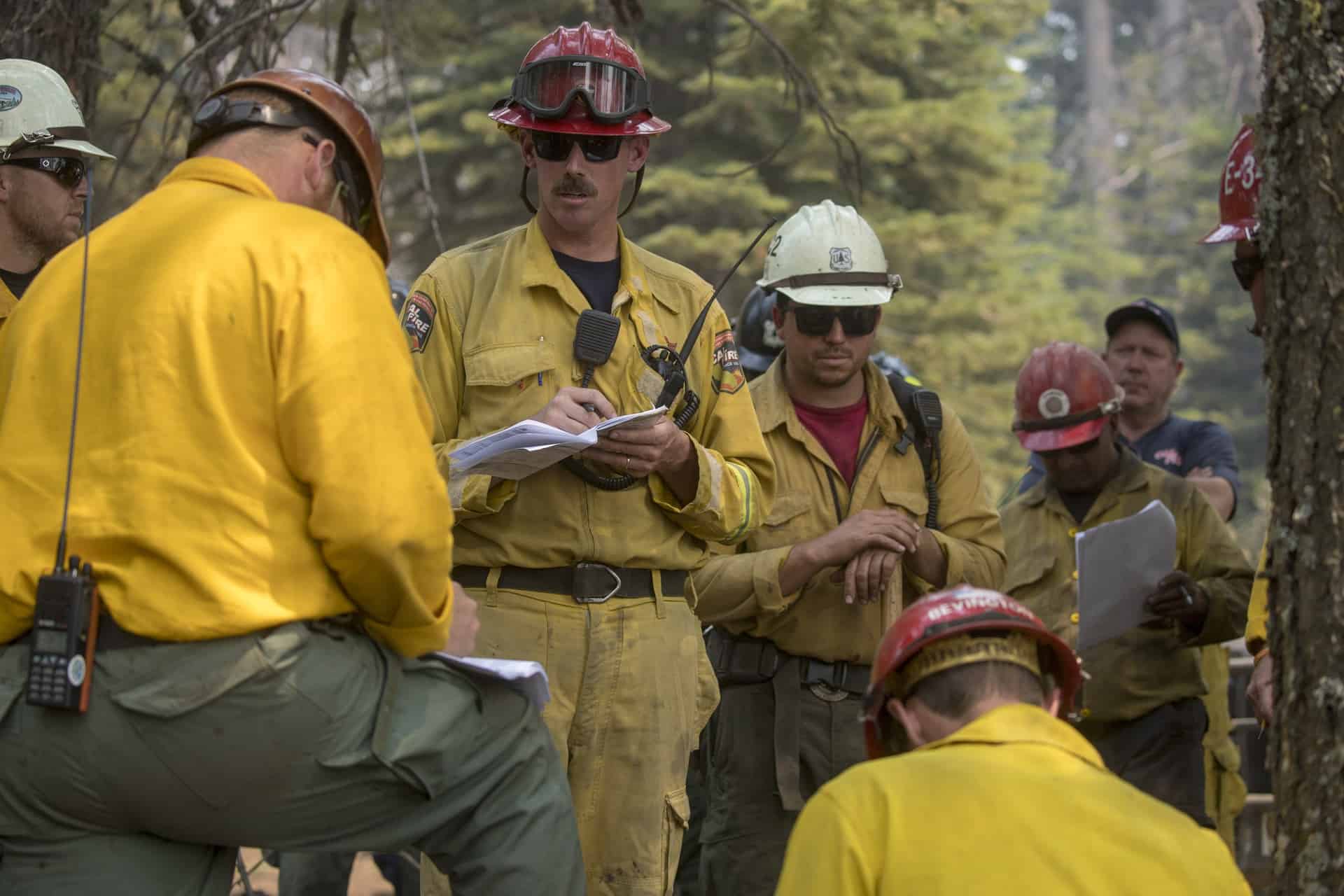 Firefighters preparing to light a backburn near Yosemite West, during the Ferguson Fire. Their efforts were largely made possible by the fuel breaks the community had finished a few weeks prior. Credit: Kari Greer, USDA Forest Service shared via Flickr Creative Commons

We are humbled and profoundly grateful to the bold decision makers and brave firefighters who risked their lives to save Yosemite West. 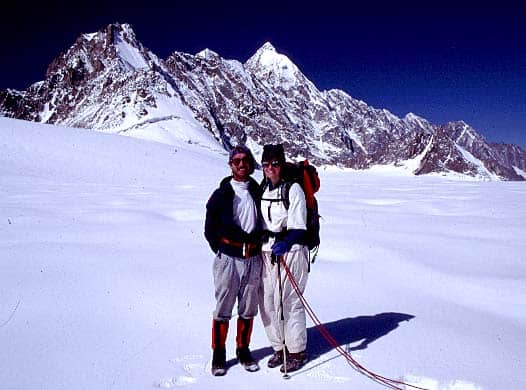 Kimberley and John’s adventures began long before moving to Yosemite West. Here, they are taking a quick photo break during a mountaineering trip in Pakistan’s Hindukush Mountains, 1994. Credit: John Mock and Kimberley O’Neil

In addition to the community wildfire resilience work, they are avid mountaineers and love exploring Yosemite National Park. Learn more about them on their website.