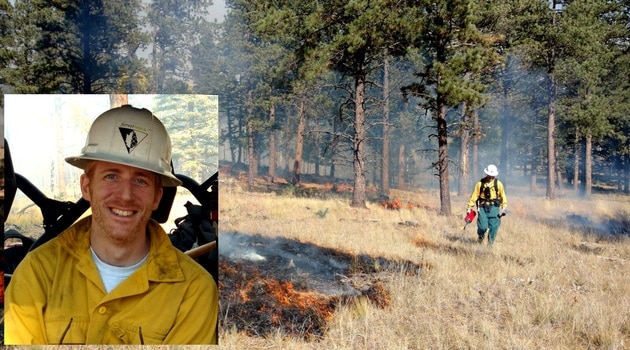 The Power of the Partnership: A Day in the Life with Eytan Krasilovsky 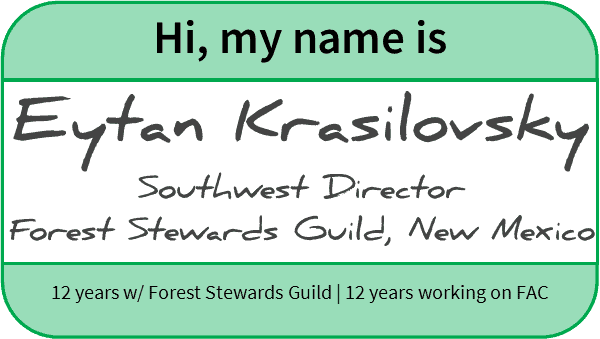 Where does your job take you?

Just yesterday, I helped lead a field tour in the Zuni Mountains landscape, where I have been working in partnership with the Cibola National Forest and others for 12 years. In that landscape, the Forest Stewards Guild (the Guild) supports summer youth crews, conducts forest and stream monitoring, and assists with forest restoration planning. We also developed a Community Wildfire Protection Plan and conducted defensible space treatments in that area. Fire adapted communities (FAC) is embedded in all of that work. The field tour was about the partnership’s latest planning effort — a project that will prepare 80,000 acres of ponderosa pine and pinyon-juniper for thinning, burning and grazing. The partnership began 2005 in an adjacent watershed and has already treated tens of thousands of acres in that watershed. Along with the National Wild Turkey Federation, the Cibola National Forest and others, the Guild started our planning efforts back in 2011, so it was rewarding to share that story with the field tour attendees.

What was most interesting about the field tour was meeting local high school science teachers who are interested in developing hands-on education sessions for their students. We agreed to work together to make that happen, and FAC will be part of the educational component. When the Guild and our partners deliver environmental education programs to youth about forests and fire, we also incorporate the social element and include FAC as part of our curriculum.

When you get back to your desk, what unexpected thing needs your attention?

Often, I receive an unexpected call from a community member asking for a fuelwood permit. For about 10 years, we’ve been working in the Rio Trampas watershed in southern Taos and Rio Arriba Counties. Currently, we have a forest and watershed restoration project on state lands. Almost all of the residents in that area heat with wood, so it is an important resource. The treatments are reducing wildfire risk, and the community members get access to fuelwood and remove heavy fuels from the sites. It’s a win-win.

The treatments are reducing wildfire risk, and the community members get access to fuelwood and remove heavy fuels from the sites. It’s a win-win.

Has FAC always been a part of your current position?

Yes, although the term “FAC” has only been used regarding my position since 2013. Prior to that, my work at the Guild was described as being “at the interface between communities and forests.” That work involved FAC-themed projects, like landscape restoration planning, developing restoration thinning crews, and writing Community Wildfire Protection Plans. As the National Cohesive Wildland Fire Management Strategy was being finalized, it was easy to see how the Guild’s work in New Mexico advanced FAC and resilient landscape concepts. Starting in 2012, the Guild also began convening prescribed fire training exchanges (TREX) and collaborative controlled burns; both of which further connected us to FAC.

What can you tell us about the Greater Santa Fe Fireshed Coalition?

The Greater Santa Fe Fireshed Coalition (the Coalition) focuses on the landscape where I live and recreate, so I’m particularly passionate about this effort. Starting back in 2015, the Guild began convening partners concerning this 107,000-acre area, to talk about how it could be more fire adapted and resilient. In the last 20 years, there has been a great deal accomplished by the City of Santa Fe and Santa Fe County, but we all agree that a lot more is needed to avert catastrophe. Similarly, the Santa Fe National Forest and the Santa Fe Watershed Association have had tremendous success with treatments and outreach regarding the city’s municipal watershed. Unfortunately, the watershed is surrounded by overgrown forests and ringed by communities. Led by New Mexico State Forestry, the Coalition formed in 2016 and is working together to create more defensible space, implement forest restoration, jump start environmental planning, and develop a resilience strategy for long-term success. The Coalition meets quarterly and is currently chaired by Santa Fe’s fire chief, Erik Litzenberg. We know we are taking on a lot of work, but everyone remains committed and enthusiastic.

When you need some inspiration, what FAC accomplishment do you relive?

When things get challenging, and they always do, I look to the accomplishments of the Forest Stewards Youth Corps, TREX, and the collaborative burns that the Guild has supported. The Forest Stewards Youth Corps dates back to the mid-1990s and, in partnership with the USDA Forest Service, has provided high school students employment and training opportunities nearly every summer since. 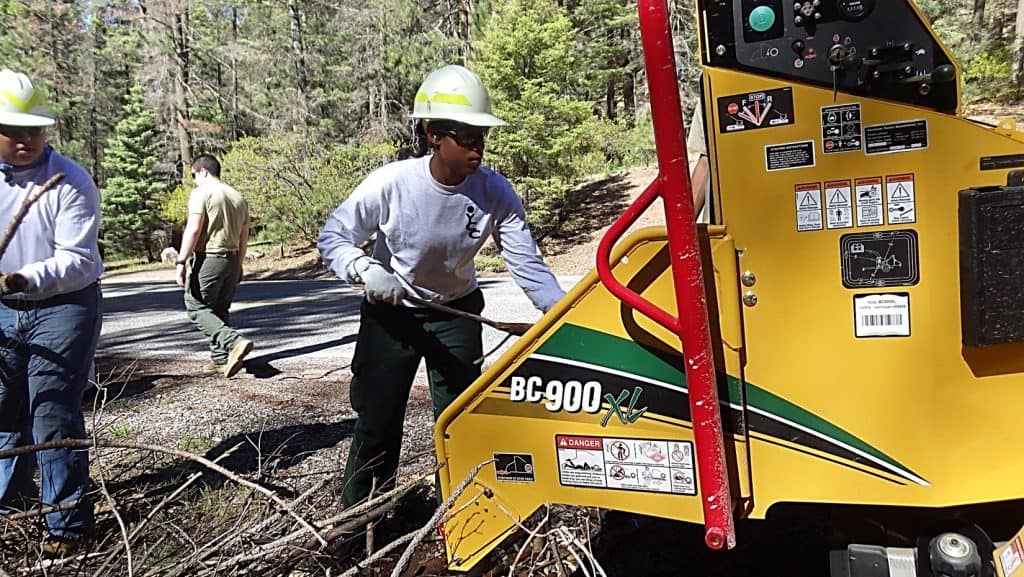 Successful implementation is hugely rewarding, but so is visiting the sites a year or two later, able to see the forests in a more natural state — with fire reintroduced.

Knowing these jobs and training experiences change the lives of rural youth is personally very rewarding and inspirational. Since 2013, the Guild has also convened several TREX events and collaborative controlled burns. These are inherently complex events, where we take on risk to restore ecosystems, train firefighters, and protect communities from hazardous fuels. Successful implementation is hugely rewarding, but so is visiting the sites a year or two later, able to see the forests in a more natural state — with fire reintroduced.

3 thoughts on “The Power of the Partnership: A Day in the Life with Eytan Krasilovsky”